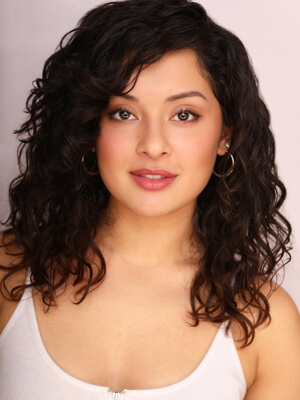 (Belmira, River Bride) she/her is a creative multi-hyphenate actor that has had the pleasure to work with talented individuals in various film, television, and theatre productions such as 20th Century, Hulu, The Civilians, and Pennsylvania Shakespeare Festival. She’s most recently been seen as “Ana” in Only Murders in the Building, and as “Anaya” in Lover’s Leap, an official selection of the Maryland Film Festival premiering June 17th. In her spare time, she likes to explore her interests in modeling, video editing, the art form of drag, and writing music and screenplays. Her identity as a proud Boricua and member of the LGBTQ+ community pushes and inspires her to participate in and/or create projects authentically and with integrity. allievazquez.com