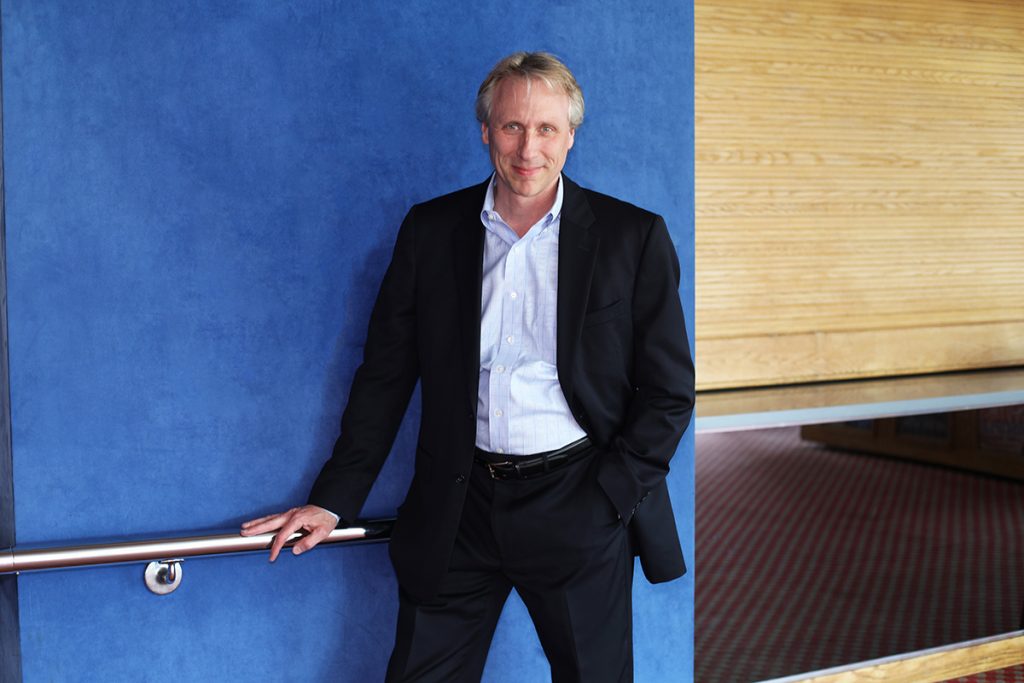 Center Valley (August 2, 2021) – Today, Patrick Mulcahy who has served as Producing Artistic Director of Pennsylvania Shakespeare Festival (PSF) since 2003, announced that he will step down from his role at the Festival at the end of the summer 2022 season.

“While my professional roots are in Shakespeare and the theatre industry, I shifted in the 1990s to pursue a career in academia,” said Mulcahy, who joined the DeSales faculty as Head of Acting in 1996. “When PSF came knocking in 2001 and then again in 2003, I was reluctant because I was happy living my passion for education as faculty.” Mulcahy eventually accepted the leadership position at PSF, reducing his faculty role, and has led the Festival for longer than any previous leader, including the founder Rev. Gerard J. Schubert, OSFS.

“Leading the Festival has been the honor of my life and has provided me with countless opportunities to continue to learn. A few years back, my wife and I began to talk about my returning to the faculty full-time. The timing is right for us, and we will continue to champion PSF to ‘ascend the brightest heaven of invention’ as patrons and fans.” He added: “PSF has never been in a stronger position. In the arts, we’re in the ‘humanity business’ and I’m proud of all we’ve accomplished at PSF – artistically, institutionally, and in our communities — and am confident our stakeholders and staff will continue to ensure the Festival’s ongoing success. I look forward to continuing to lead PSF through the 2022 season and then bringing what I’ve learned in these nearly two decades back to our students at DeSales.”

Under Mulcahy’s leadership, PSF attracted its first Tony Award-winning artists to its summer seasons, expanded its offerings to include musicals, productions in repertory, and as many as three Shakespeare plays per summer season. The Festival doubled its attendance, served its one-millionth patron, quintupled its endowment, eliminated its debt, created a modest cash reserve, grew and diversified its Board of Directors and company, and secured its first and subsequent grants from the National Endowment for the Arts and other major arts grant makers. In the last decade, PSF has become just one of a handful of professional theatres on the continent offering this range of programming to destination patrons in a single summer season. He also supported added accessibility programming, championed PSF’s education programs, increased the reach of its school tours, and created a Shakespeare for Kids production each season. Recently, PSF successfully pivoted in the pandemic to offer a broad range of indoor, outdoor, and virtual programming for the 2021 season.

“Patrick’s leadership of PSF is a fitting testament to his talents as a Renaissance man – – a courageous strategist, thoughtful visionary, attentive fundraiser, effective manager, artist, motivator, and friend. Rarely have I witnessed so many successes of a leader during his or her tenure of any organization, be it a diversified for-profit business or a nonprofit arts organization,” says PSF Board President Judy Harris. “We hold enormous gratitude for all that Patrick has built and nurtured while leading PSF to the brightest of futures. We bear equal gratitude to DeSales University for having fostered the creation and growth of PSF, and for ensuring that Patrick return full-time to its esteemed faculty.”

Mulcahy led the 2009 strategic planning process that resulted in PSF’s Vision 2030, a commitment to world-class professional theatre, and a body of work that garnered coverage in The New York Times, The Philadelphia Inquirer, Playbill magazine, and The Washington Post. He led The Campaign for PSF in 2013-2015, which raised more than $4 million, primarily for endowment growth to support PSF artistic and education programming. Mulcahy also stewards PSF’s Equity, Diversity, Inclusion, and Anti-Racism Working Group and, with the support of the entire PSF team, has achieved increasingly diverse programming and summer staffing of artists and artisans.

In addition to having worked closely with Festival founder Fr. Schubert, and having acted and directed at the Festival in the late 1990s, Mulcahy’s tenure as leader of the Festival represents nearly two-thirds of the company’s 30-year history. In his dual role as producing artistic director of PSF and head of acting for DeSales University, Mulcahy has supported the career progression of both emerging leaders and developing artists, including many alumni who are now enjoying successful performing careers or leadership positions at other theatres.

“It’s truly been an honor to work so closely with so many great artists, Board members, and staff. I will continue to support the Festival in any way I can,” says Mulcahy, “once I shift the focus of my attention to serving the students and the DeSales University Theatre Department. It will be a joy to come back full time to this Department, which is rich with distinctive offerings, and to working more closely once again with my gifted colleagues there.”

DeSales University President Rev. James A. Greenfield, OSFS, shared, “on behalf of DeSales University, I thank Patrick for his visionary and transformative leadership of PSF. Its founder, Fr. Jerry Schubert, was famous for his exhortation: ‘Give beauty back.’ Patrick’s work at PSF’s helm has ensured that we will be giving beauty back to countless people for generations to come. I am confident that Patrick’s creative collaboration with the PSF board has fortified the Festival for a transition that will greatly strengthen our future.”