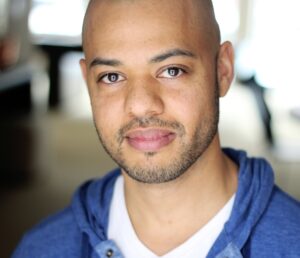 In the spring of 2005, I had the privilege of being in the rehearsal room as August Wilson brought the final chapter of his ten-play cycle (Radio Golf) for its world premiere at Yale Rep. As an understudy, I ran lines with the great Anthony Chisholm, received guidance from director Timothy Douglas, and most importantly, sat only a few feet away from the playwright himself, absorbing his transforming language flowing from the company of actors.

Mr. Wilson sat with quiet majesty, carefully listening, ready each new day with fresh pages. At inception, the poetry felt divine to me, but he was still in process, and the words were changed and rearranged throughout previews. Each day the story came more into focus, and although he was the “greatest living playwright,” he was still at work, in concert with this company, listening and refining.

When I am a bit overwhelmed by the daunting task of bringing one of the greatest plays in the English language to PSF, I try to heed August Wilson’s advice to himself, “to be empowered by the ‘chair,’ and sit in the seat of theatre-makers that have come before.”

So I imagine what the room would have been like in the early days, in Fences development, before Broadway, before Tony Awards, and before the label of America’s Greatest Living Playwright. The days of developing a new play. Our work this summer then, like that of Radio Golf, is the act of listening and refining.

So, as I sit and listen to Fences in 2022, and hear voices from the chairs that have come before, I hear Oscar Wilde saying, “Children begin by loving their parents; after a time, hey judge them; rarely, if ever, do they forgive them.” But then there’s Mr. Wilson’s rebuttal in Fences’ epigraph. He writes, “When the sins of our fathers visit us, we do not have to play host. We can banish them with forgiveness; As God, in His Largeness and Laws.”

Fences lives in the powerful faith in the possibility of forgiveness. However, it often feels like an impossible task. The trauma of the father’s sin is a charismatic adversary whose lessons can become the malignant lifeblood of identity, woven into marriage vows, the bonds of parents and children, and siblings’ duty. It can become the fabric of a family. But how glorious is it then when we can reclaim our identity by trumpeting out sin with forgiveness?

Fences intended to arrive at PSF in 2020. So much in the world has changed since then. The pause has given time to reflect and move forward with renewed grace. I have been thinking about the role of theatre and “the chair” a lot—the playwright’s chair, the director’s chair, the actor’s chair. But what I keep coming back to is the audience’s chair. The chair to sit and watch and listen to a play together. The chair to bear witness in the age-old tradition that brings us back to the DNA of what it means to be human. Communion in the simple truths of love, honor, duty, and betrayal. The chair that allows us to see ourselves reflected in the nobility of a black garbage man and find the grace to forgive and be forgiven.

Fences is our American King Lear, and as a young understudy in 2005, it was not lost on me that I was in the room with Shakespeare. So, it now feels fitting that I help bring Fences to the Pennsylvania Shakespeare Festival, to have audiences that have communed with Hamlet, and Cleopatra, do so with Troy and Rose, and maybe sit in the chair that allows us all to listen and refine our own story.