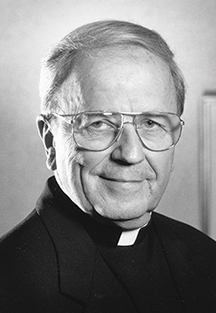 Equally dedicated to theatre professionals and to theatre students, Father Schubert believed Shakespeare to be the essence and pinnacle of theatre artistry, and a profound celebration of humanity for audiences. A professional company in residence at DeSales University, PSF was the crown jewel in Rev. Schubert’s illustrious career.

Patrick Mulcahy, who succeeded Father Schubert as Producing Artistic Director, wrote to the staff: “It is too soon to lose a man to whom so many owe so much.  My own grief is deep for the loss of this great and beautiful man who has shaped all of our lives and, for many of us, our life’s work.  A true visionary, a caring person, and a good friend.”

A life in the theatre would not have seemed self-evident.

A professed member of the Oblates of St. Francis de Sales for 65 years, Father Schubert, was born in 1929 in Philadelphia to Frederick and Mary Schubert, a builder and a homemaker. Although he received a full scholarship to Johns Hopkins University to study civil engineering, he heard the call to priesthood and applied to the Oblates. He entered the seminary and was ordained to the priesthood in 1959.

Father Schubert earned a bachelor’s degree in philosophy (1955), a master of arts in theological studies (1960), and a master of fine arts in speech and drama (1964) from The Catholic University of America. He earned a Ph.D. in theatre from the University of Denver in 1970.

His career included serving as chairman of the English department and head of the drama program at Salesian High School in Detroit, Michigan; working as an actor and company manager for the United Service Organization (USO) during a 10-week European tour of the production of Brigadoon; and an appointment as a special observer of directorial techniques and company management of the Royal Shakespeare Company in Stratford-upon-Avon, England.

In 1969, he was hired as chair of the performing and fine arts department at a small, liberal arts college, Allentown College, established by the Oblates of St. Francis DeSales, a position in which he served until his retirement in 1999. He worked for two more years as producing artistic director for PSF and then in 2001 retired to service on the Festival board through 2015.

Situated in a cornfield, the college grew into DeSales University, and its theatre program into a highly respected training ground for actors, dancers, directors, designers, educators, and technicians—with alumni working on Broadway and professional theatres around the country, in film, television, and every major media outlet.

Creating a professional theatre company was a long-held dream realized with the founding of Pennsylvania Shakespeare Festival in 1992.  Giving a summer home to professional artists and giving students an opportunity to work alongside them, PSF began humbly that season with 50 performances of two plays by Shakespeare and a children’s play, attended by just over 10,000 patrons.

Today, the Festival produces four plays (at least two by Shakespeare), a musical, and two plays for children each summer: Nearly 150 performances are attended by an audience of more than 35,000. The Festival is recognized as the Official Shakespeare Festival of the Commonwealth of Pennsylvania.

“In honor of all he has done for PSF, the theatre community, and for DeSales University, we are honored to dedicate our upcoming 25th anniversary season to Fr. Schubert, our founder and friend,” says Mulcahy.  “I know that everyone associated with PSF counts it a privilege to have worked with Fr. Jerry and to continue to carry his legacy forward and upward.  He would expect nothing less.”