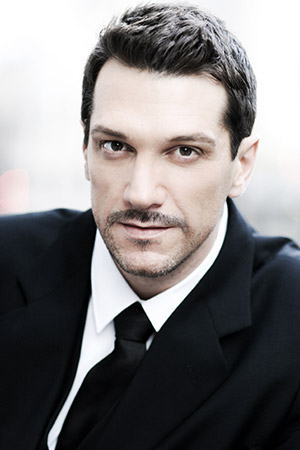 Born in São Paulo, baritone Szot has appeared with many leading opera companies throughout Europe, the United States, and his native Brazil. In 2008 he won the Tony Award for Best Leading Actor in a Musical, the Drama Desk, the Outer Critics Circle Award, and the Theatre World Award for his portrayal of Emile De Becque in the Broadway revival of Rodgers & Hammerstein’s South Pacific at Lincoln Center Theater. In the 2008-2009 season, Szot made his New York Philharmonic debut in a concert conducted by Marvin Hamlisch, appearing alongside Liza Minnelli, Joel Grey, and Kelli O’Hara. In 2010–2011, he made his highly acclaimed Metropolitan Opera debut in a new production of The Nose, conducted by Valery Gergiev. Mr. Szot has also appeared at Opera National de Paris, Teatro Royal de Madrid, Dutch National Opera, Opera Australia, Teatro dell’Opera di Roma, Washington National Opera, Teatro alla Scala, Carnegie Hall, and at the Glyndebourne Festival.

“Mr. Szot is admired the world over for his mesmerizing talents and we are thrilled he will share his extraordinary gifts in our production of Evita,” says Producing Artistic Director Patrick Mulcahy. “PSF’s vision to create world-class theatre could not be better served than with the artistry of Paulo Szot and Dee Roscioli.”

Associate Artistic Director Dennis Razze and veteran director of all of PSF’s musicals will direct.

“This is a remarkable opportunity to have an artist like Paulo Szot play the role of Juan Perón in PSF’s production of Evita. He is an extraordinarily talented actor and singer who I have admired for many years. I am delighted he will join our company this summer!”

Starring opposite Szot in the title role is Dee Roscioli. She is best known for her long run as Elphaba on Broadway, and in the Chicago, San Francisco, and national touring productions of the hit musical Wicked.

Roscioli returns to PSF following her recent performance of Fruma-Sarah in the Broadway revival of Fiddler on the Roof andin John Kander’s new musical KID VICTORY at the Vineyard theatre directed by Liesl Tommy. She performed the leading role of Mrs. Lovett in the Festival’s 2012 production of Sweeney Todd: The Demon Barber of Fleet Street.

The Festival’s upcoming 26th season is sponsored by David B. Rothrock and Patrina L. Rothrock. Associate Season Sponsors are the Harry C. Trexler Trust, Linda Lapos and Paul Wirth, and the Szarko family. The season media sponsor is The Morning Call.

The Festival’s award-winning company of many world-class artists includes Broadway, film, and television veterans, and winners and nominees of the Tony, Emmy, Obie, Outer Critics Circle, Drama Desk, Jefferson, Hayes, Lortel, and Barrymore awards. A leading Shakespeare theatre with a national reputation for excellence, PSF has received coverage in The New York Times, The Washington Post, NPR, American Theatre magazine, and the Philadelphia Inquirer. “A world-class theater experience on a par with the top Bard fests,” is how one New York Drama Desk reviewer characterized PSF.

Founded in 1992 and now the Official Shakespeare Festival of the Commonwealth of Pennsylvania, PSF’s mission is to enrich, inspire, engage, and entertain the widest possible audience through first-rate productions of classical and contemporary plays, with a core commitment to Shakespeare and other master dramatists, and through an array of education and mentorship programs. A not-for-profit theatre, PSF receives significant support from its host, DeSales University, and from the Pennsylvania Council on the Arts. With 150 performances of seven productions, the Festival attracts patrons each summer from 30+ states. In 25 years, PSF has offered 161 total productions (69 Shakespeare), and entertained 850,000+ patrons from 50 states, now averaging 38,000+ in attendance each summer season, plus another 15,000 students each year through its WillPower Tour. PSF is a multi-year recipient of awards from the National Endowment for the Arts: Shakespeare in American Communities, and is a constituent of Theatre Communications Group, the Greater Philadelphia Cultural Alliance, and the Shakespeare Theatre Association. In 2013, leaders of the world’s premier Shakespeare theatres gathered at PSF as the Festival hosted the international STA Conference.
The Festival’s vision is for world-class work.